Finding a causality between these time series data is like getting knowledge from the data. For example, suppose we observed the coal consumption from decades. And it led to an increase in atmospheric carbon dioxide concentration, which affect the global temperature. In this case, temporal causality is the causal relationship between time series data.

Granger Causality is kind of temporal causality, and it describes the relationship between two time series data. Here are some basic principles. 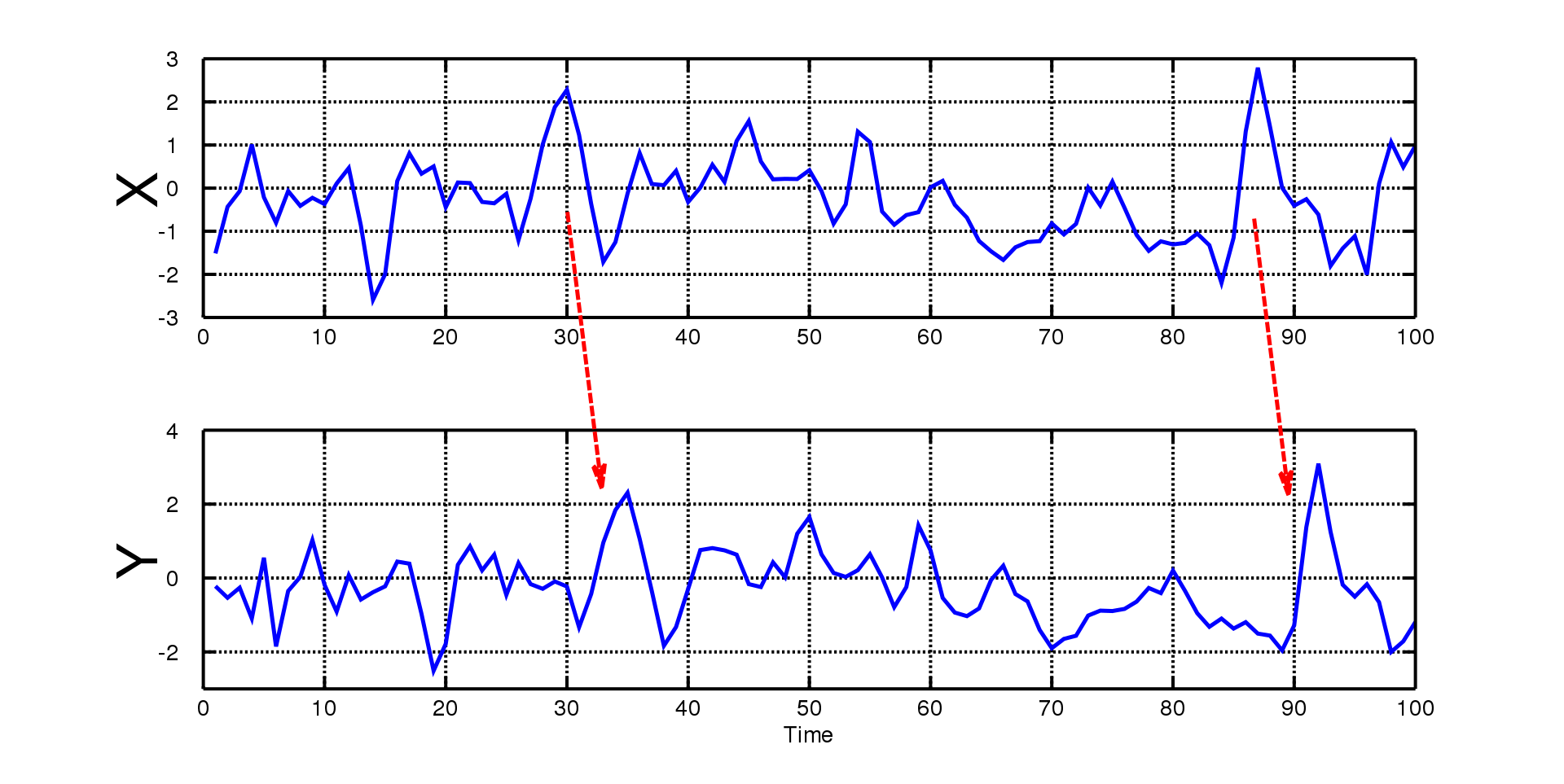 First, a cause is prior to its effect. In this picture, we can see similar patterns from two figures. After the prior event occurs in cause and after a certain time, its effect is also observed in other time series data. Then, we assume that prior event maybe affect the post event. In this case, Granger Causality is caused by temporal order of event.

We covered the definition of causality in the previous post. But Granger causality is different from them because of its temporal ordering characteristics, meaning its causal information contains temporal properties. 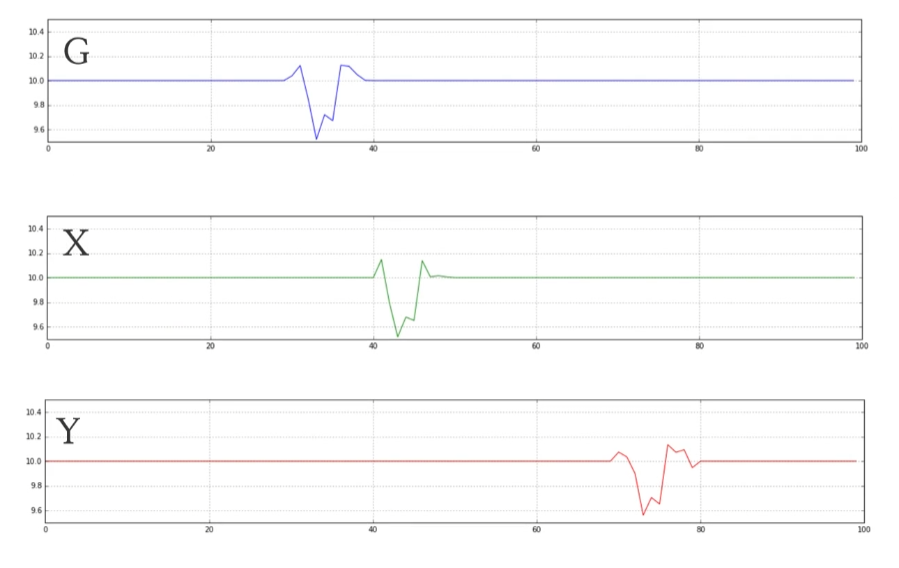 But think about that we don’t know about $G$, only know $X$ and $Y$. We may assume that $X$ and $Y$ have sort of temporal causality between them.

As a result, we can not ignore the possibility that there might be a real cause compound, like $G$. In this case, $X$ and $Y$ are Granger Causality.

Let’s consider another example, the chicken and egg problem. Which came first, the chicken or the egg? And is there a correlation between the number of chickens and the number of eggs? If it is, did the chicken affect the egg or vice versa? Granger causality can be used to answer this question.

We can focus the word “Maybe”. Granger causality does not capture precise causal relationship, and these conclusions are just one of many possible interpretations. We can also say that “Maybe a chicken make an egg”. By comparing the prediction performance, we were able to see which variables affect other variables.

Then how can we compare predictive performance? How do we determine which model has better performance? Actually, it is not a simple matter. If we make the model more complex, the error will be low. Moreover, it occurs overfitting problem, so we need to balance the complexity of the model with the error. 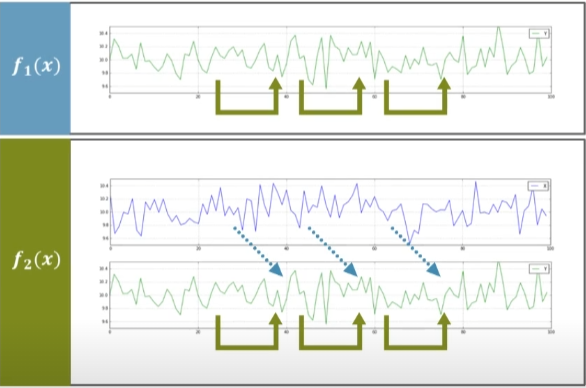 Suppose we have two cases. One is the model with one time series data that uses only past $Y$ values to predict future $Y$ values, and the other is complex model that uses not only past $Y$ but also $X$ values for prediction. In this case, the RSS (Residual Sum of Squares for short), the error can be expressed like this,

Of course, the error of second one(the complex one) will be smaller than first one. But is the second model the better model?

If this value is close to 1, it means that there is not much difference in predictive performance between the two models. If it is much greater than 1, then we can determine that this is not coincidence but that the second model has a better performance. Whole process of measuring $F$ is called F-test, which was named in honor of Ronald Fisher. 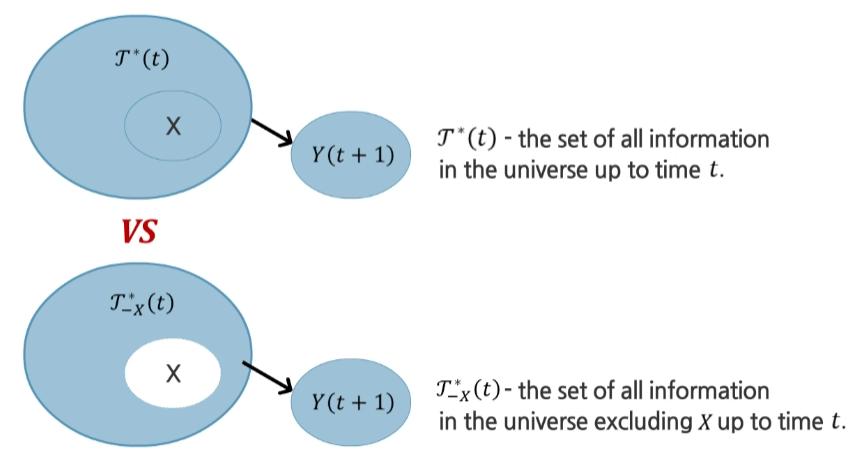 then, we can say that $X$ and $Y$ are granger causality.

We go back to previous example.

The first model uses only $Y$ for prediction, so it can be expressed like this,

And second model is more complex model using $X$ and $Y$ for prediction.

If a model using both $X$ and $Y$ has better predictive performance, it can said that $X$ and $Y$ are granger causality.

In this case, to predict the $X$ value at time $t$, a certain range of data is required from $t-1$. Here, the length of range is called lagged or window.

And for estimating the value at future time, it can be obtained by a linear combination of previously described values. In this case, $a$ tensor express the coefficients that multiply all time series data, which has 3 dimensions.

We can express it with matrix notation. Here, Evolution matrix is defined with all coefficient at time $t$. Since we use $L$ times of data, $L$ matrices are generated. If we use sparse modeling when creating a linear regression model, the element values of matrix will be mostly zero. In that case, nonzero elements represent the correlation between the two $X$ data. In other words, it helps to predict the first time series data value at time $t$.

As a result, through evolution matrix, we can interpret the model (interpretability). And it is philosophy of Granger Causality that causality always occurs in temporal order, and causes precede effects.

In this post, we can use the granger causality as a kind of temporal causality. We can also determine if there is a Granger causality by determining whether the existence of timeseries data helps to predict other time series data.