In this exercise, you have been given a corpus ted which contains the transcripts of 500 TED Talks. Your task is to generate the tf-idf vectors for these talks.

In a later lesson, we will use these vectors to generate recommendations of similar talks based on the transcript.

You now know how to generate tf-idf vectors for a given corpus of text. You can use these vectors to perform predictive modeling just like we did with CountVectorizer. In the next few lessons, we will see another extremely useful application of the vectorized form of documents: generating recommendations. 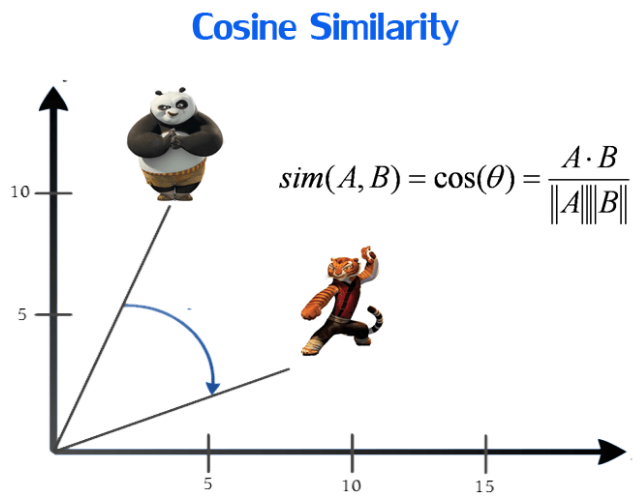 Cosine similarity matrix of a corpus

Remember, the value corresponding to the ith row and jth column of a similarity matrix denotes the similarity score for the ith and jth vector.

As you will see in a subsequent lesson, computing the cosine similarity matrix lies at the heart of many practical systems such as recommenders. From our similarity matrix, we see that the first and the second sentence are the most similar. Also the fifth sentence has, on average, the lowest pairwise cosine scores. This is intuitive as it contains entities that are not present in the other sentences.

Building a plot line based recommender

In this exercise, you have been given tfidf_matrix which contains the tf-idf vectors of a thousand documents. Your task is to generate the cosine similarity matrix for these vectors first using cosine_similarity and then, using linear_kernel.

We will then compare the computation times for both functions.

Notice how both linear_kernel and cosine_similarity produced the same result. However, linear_kernel took a smaller amount of time to execute. When you're working with a very large amount of data and your vectors are in the tf-idf representation, it is good practice to default to linear_kernel to improve performance. (NOTE: In case, you see linear_kernel taking more time, it's because the dataset we're dealing with is extremely small and Python's time module is incapable of capture such minute time differences accurately)

In this exercise, we will build a recommender function get_recommendations(), as discussed in the lesson. As we know, it takes in a title, a cosine similarity matrix, and a movie title and index mapping as arguments and outputs a list of 10 titles most similar to the original title (excluding the title itself).

You have been given a dataset metadata that consists of the movie titles and overviews. The head of this dataset has been printed to console.

In this exercise, we will build a recommendation engine that suggests movies based on similarity of plot lines. You have been given a get_recommendations() function that takes in the title of a movie, a similarity matrix and an indices series as its arguments and outputs a list of most similar movies.

You have also been given a movie_plots Series that contains the plot lines of several movies. Your task is to generate a cosine similarity matrix for the tf-idf vectors of these plots.

Consequently, we will check the potency of our engine by generating recommendations for one of my favorite movies, The Dark Knight Rises.

You've just built your very first recommendation system. Notice how the recommender correctly identifies 'The Dark Knight Rises' as a Batman movie and recommends other Batman movies as a result. This sytem is, of course, very primitive and there are a host of ways in which it could be improved. One method would be to look at the cast, crew and genre in addition to the plot to generate recommendations.

n this exercise, we will build a recommendation system that suggests TED Talks based on their transcripts. You have been given a get_recommendations() function that takes in the title of a talk, a similarity matrix and an indices series as its arguments, and outputs a list of most similar talks.

You have also been given a transcripts series that contains the transcripts of around 500 TED talks. Your task is to generate a cosine similarity matrix for the tf-idf vectors of the talk transcripts.

Consequently, we will generate recommendations for a talk titled '5 ways to kill your dreams' by Brazilian entrepreneur Bel Pesce.

You have successfully built a TED talk recommender. This recommender works surprisingly well despite being trained only on a small subset of TED talks. In fact, three of the talks recommended by our system is also recommended by the official TED website as talks to watch next after '5 ways to kill your dreams'!

In this exercise, we will generate the pairwise similarity scores of all the words in a sentence.

Notice how the words 'apples' and 'oranges' have the highest pairwaise similarity score. This is expected as they are both fruits and are more related to each other than any other pair of words.

In this final exercise, you have been given lyrics of three songs by the British band Pink Floyd, namely 'High Hopes', 'Hey You' and 'Mother'. The lyrics to these songs are available as hopes, hey and mother respectively.

Your task is to compute the pairwise similarity between mother and hopes, and mother and hey.